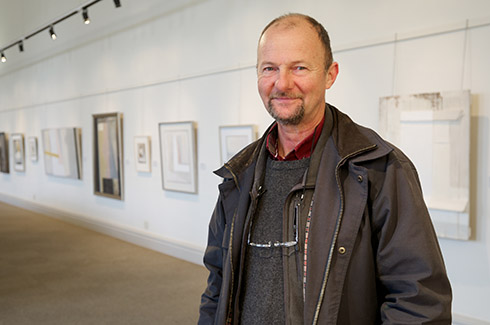 Vivian Hubert van der Merwe (born 29th May, 1956 in Cape Town, South Africa) spent his childhood and school years in the Cape Province, Transvaal and Natal regions of South Africa. Despite having had no early art tuition, Vivian's earliest work demonstrates clear artistic prodigy. In 1980 he completed his undergraduate studies in fine art, studying painting under Stanley Pinker at the Michaelis School of Fine Art, University of Cape Town. He was later awarded the Master of Fine Art Degree in 1983. Apart from his politically charged prints and drawings (1973 and 1974), Vivian's early works (1976-81) expressed a remarkable aptitude for high realism, and at times extreme naturalism; a sort of twentieth century tribute to his own Dutch and Flemish heritage.

During the decade from 1978 to 1988 Vivian's painting became increasingly abstract, with a gradual, yet highly conscious deconstructing of the rules, norms and conventions of pictorial representation. This affirmation of the structure of pictorial space, and the abstract and plastic language of the art of painting, was an expression of his increasing preoccupation with the nature and meaning of Form in painting. What we see in these works is much more than a mere re-invention of the reductionist wheel of Modernism.

In later work the still-life objects are no longer obvious. They exist as highly refined residual, or structural elements, resonating discreetly through shape, colour, light and texture. It is this later work for which he is best known and respected. Despite his eclectic and somewhat postmodernist re-affirmation of Eurocentric precedents, his art remains difficult to place in a particular stylistic category. It has been said that "artistically he occupies a place somewhere beyond Morandi and Ben Nicholson."1 And while other commentators have pointed to the influence of Malevich, Parisian Modernism, Tapies and African artefacts, Vivian's unrelenting concern with Form locates his work outside the postmodern orbit and the Eurocentric mainstream.

"He is acutely aware of the long history of the concept of form in art as well as in philosophy and theology, which dates back to ancient Greek times and still plays a crucial role in modern science, contemporary aesthetics and theory. Despite this fact, or perhaps precisely because of it, his art is predicated on the possibility of the rediscovery of the true meaning of form in that silent realm beyond contemporary preoccupations with the semantics of language. For this reason Vivian eschews politically engaged or 'narrative' art in favour of the genre which allows him the greatest freedom and experimental range with regard to formal or structural possibilities, namely the still-life. Paradoxically, however, instead of proving to be merely sterile formalism, his treatment of form establishes its autonomy in a way that does not leave our moral sensibility untouched. In the final analysis, therefore, his works are a powerful reminder that art opens up a fissure in the obviousness of the everyday - an opening within which new possibilities dislodge what is merely given."2

This idea is expressed in the artist's own words:

"When language is pushed to the limits of its expressive form, it reaches a threshold beyond which it can no longer cope. It comes, as George Steiner put it, to "the shores of silence". Speaking as a painter, it is my conviction that it is at these shores where disciplines such as mathematics, physics, music and painting begin, and the conditioned perspectives of history, style and semantic lineage are transcended and sloughed away. It is in these moments of potent silence that Form is rediscovered and affirmed . . . yet man cannot create ex nihilo."3

Since 1995 Vivian van der Merwe has lived and worked in Stellenbosch, a small, picturesque university town in the Cape Province.